Arming and Disarming: A History of Gun Control in Canada

Gun control is an issue that provokes fierce debate because it touches on a sensitive political question: should individual liberty be sacrificed for promises of increased security? R. B. Brown is to be commended for writing the first comprehensive history of gun control in Canada. He shows how governmental attempts to manage access to firearms predate Confederation. Many will be surprised to learn that, for most of its history, Canadian authorities actively encouraged men to arm themselves. Beginning early in the 17th century authorities promoted the ownership and use of firearms by “trustworthy” citizens despite periodically taking steps to disarm ethnic groups deemed “suspicious” or “threatening.” I was however, disappointed that Brown fails to properly appreciate the enduring importance of individual liberty in a free society, including the right to bear arms.

Ever since the European Enlightenment in the 17th and 18th centuries, it has been widely accepted that individuals enjoy natural rights that governments should respect, such as political and religious freedom. Drawing on John Locke, the English Bill of Rights in 1689 affirmed, among other things, that the Crown was required to seek the consent of the people in passing legislation and that individuals (or at least some classes) had the right to bear arms. Nineteenth century Canadian politicians, including Sir John A. Macdonald, Edward Blake and Robert Baldwin, argued strongly that disarming Canadians infringed upon their rights as English subjects. Curiously, present-day Canadian progressives do not fear governmental limitations on classic individual political freedoms, such as firearms rights or free speech; rather they limit their concerns to freedoms of personal expression, hence protesting restrictive drug laws or governmental limitations on abortion rights or same-sex marriage.

Arms are problematical for government because they provide both benefits and liabilities. For centuries, governments have feared the armed people they relied upon. Indeed, the nobles who imposed the English Magna Carta upon the Crown were armed. The “hue and cry” was a vital part of English justice at least as early as the 13th century and citizen-soldiers were responsible for defending the realm. The importance of an armed populace may have declined since the 19th century, because of the rise of professional police and military, but armed citizens still play a vital role in modern nations. Most Western nations depended upon men who were familiar with firearms as a source of skilled soldiers throughout the 20th century as well as during the recent Afghanistan involvement. Even in the 21st century, countries as diverse as Switzerland, Singapore and Israel continue to count on citizen-soldiers to guard their sovereignty. Armed individuals (both men and women) continue to play a vital role in protecting themselves and their families from violence. On a more mundane level, hunters in North America not only help to control burgeoning wildlife populations, such as deer, geese, and bears, even paying for the privilege, and they contribute disproportionately to conservation.

Whatever benefit arms may offer, an armed populace poses an existential threat to any regime. Every government, historical or modern, must successfully deal with challenges from uprisings and even revolution. History is replete with examples of states that have not managed to do so. Maintaining power is much more important to a regime than is suppressing criminal violence, or preventing the relatively rare multiple-victim killing, no matter how well publicized. This is not to say that public safety is unimportant to the authorities. Shocking criminal violence can be useful in provoking public demand for additional governmental powers. In the 21st century, converging social trends have increased governmental concerns about the unreliability of the general populace; for example, terrorism, high levels of urbanization and immigration, and the deinstitutionalization of mental patients have led to the modern surveillance state.

In the first few chapters of Arming and Disarming, Brown does an excellent job in placing gun use and firearm regulations in the political contexts existing in British North America beginning in the early French and British settlements through Confederation and up until the end of the 19th century. He emphasizes that throughout this period, authorities encouraged able-bodied Englishmen to acquire and use firearms, doing so primarily to help defend the country from external threats. Brown observes that firearms were indispensible, particularly during early centuries, for providing food, shooting pests, and for personal defense. However, he may not appreciate the full importance of civilian firearms ownership in the 18th and 19th centuries because of the difficulty of estimating household firearms stock. Canadian historians have not analyzed wills and estate records to the extent that American scholars have done so.

Brown deserves praise for pointing out the racist roots of Canadian gun laws. Despite vigorously promoting the use of firearms by men they considered loyal, in times of crisis colonial governments passed laws specifically designed to disarm groups seen as suspicious or threatening. The earliest such laws targeted Aboriginal peoples, and, after the British conquest, the resident French population. Later in the 18th century and throughout the 19th century authorities occasionally reacted with gun laws to fears concerning Irish laborers, Italian immigrants, and Métis. Laws disarming threatening groups were episodic and typically were ignored after the crisis had passed. In the 20th century, governmental concern shifted to disarming alleged Bolsheviks and enemy aliens. During World War I, Canada disarmed or incarcerated Eastern Europeans, especially Ukrainians, and during World War II, authorities disarmed or incarcerated Japanese, German and Italian Canadians. In British Columbia, all Orientals were disarmed, including Chinese who were born in Canada, even though China was a wartime ally of the British Commonwealth.

Brown unequivocally aligns himself as a “progressive” in the introduction by citing approvingly such controversial icons as Michael Bellesiles and even Michael Moore. The claims of both have now been thoroughly discredited. Brown seems not to realize that staking out such a posture undermines his criticism of scholars who allow their personal biases to shape their research. Unfortunately, Brown’s ideological biases lead him to ignore or misrepresent important historical events and positions, such as the American Second Amendment. Too often he seems satisfied with stereotypes. Brown also makes minor errors regarding firearms, such as referring to revolvers as pistols, and confusing semi-automatic and fully automatic firearms.

I was disappointed that Brown adopts the notion, popularized by the now disgraced Bellesiles, that arms manufacturers were the driving force in artificially transforming guns into symbols of masculinity during the 19th century. This is a profound misunderstanding as it exaggerates the powers of marketing and devalues the deep attachment to British Imperialism felt by Canadians as well as the fierce emotional pull of the wilderness and the frontier across North America. Brown’s prejudices as a progressive lead him to fundamentally misconstrue the motivations of firearms owners. His musings about gun ownership deriving from feelings of insecurity derive from a misreading of Freud.

Brown’s pose of evenhandedness by and large works well, but it subtly minimizes or devalues support for positions he does not endorse. Delegitimizing the opponents of gun control does a disservice to Canadian history. Scholars agree that the founders of both Canada and the United States believed they inherited the rights of Englishmen, including the right to bear arms. While Brown cites the reluctance of some colonial leaders (such as the first Canadian Prime Minister, Sir John A. Macdonald) to impose gun controls on the grounds that doing so would violate their rights as English subjects, he does not appreciate the enduring importance of individual freedom in democratic societies.

Brown rightly deplores the government’s use of “racist, ethnocentric and xenophobic rationales” to disarm potentially “untrustworthy” citizens, but he does not seem to realize the full implications for contemporary gun laws which encompass everyone, not just a vulnerable minority. Using the power of the criminal code to impose a Draconian regulatory system on ordinary people sends a powerful message that the state views everyone as untrustworthy or threatening. Such views have troubling implications in a democracy. Ironically, progressives support the heavy hand of the state falling on groups whose threat they exaggerate, such as rural men who own guns. Contemporary gun laws demonize males by adopting the radical feminist argument that men by their very nature endanger women.

Brown’s progressive biases taint his discussion of the debate over modern gun laws. After 1990, he relies too heavily upon Toronto progressive newspaper columnists without availing himself of more diverse sources, such as studies by criminologists, conservationists, and economists. Statistics or evaluations that are inconsistent with his prejudices are put in critics’ mouths as mere claims. This has the effect of delegitimizing the opposition to additional gun laws and avoiding the key question of whether gun controls are effective in reducing criminal violence. In lieu of evidence that the proposed gun laws will save lives, Brown merely quotes the claims of their supporters. Had he dug more deeply, he would have discovered that no methodologically sound studies exist supporting the effectiveness of general firearms laws. Curiously, Brown recognized the importance of objectively evaluating the effectiveness of the provincial hunter safety regulations introduced in the 1960s and 1970s.

Brown’s treatment of the parliamentary opposition to Bill C-68 illustrates his bias. It is a minor but revealing example. While he observes that the Reform Party fought the Liberals’ 1995 gun law, he fails to mention that two of the three other opposition parties joined Reform in condemning the proposed legislation. (The Bloc Quebecois joined the Liberals in voting for Bill C-68.) Brown entirely ignored the principled opposition to the bill by the Progressive-Conservatives.

Brown notes the drop in the number of gun owners with the introduction of licensing and registration in 1998, but he erroneously assumes that this was solely due to people who disarmed themselves. In 1999, the Justice Minister conservatively estimated there were 3.8 million firearms owners and 11 million firearms. By July 2003, only 2.1 million Canadians had applied for a license, and 6.3 million firearms were registered. Millions of guns disappeared. There is no evidence that they were surrendered to the police or exported. Undoubtedly many Canadians did disarm, but an unknown number did not. As with drug laws, when people decide a law is unreasonable, they simply do not comply.

To sum up, Arming and Disarming is the first comprehensive history of gun control in Canada that extends from the colonial period to the twenty-first century. This is must reading for anyone interested in gaining a greater understanding of the debate over firearm regulations in Canada. Brown deserves praise for attempting such a daunting task. That his reach exceeds his grasp is disappointing but only to be expected, since he has chosen a difficult challenge. Understanding the reasons behind political battles requires a deep understanding of culture, politics and economics.

Gun control endures as a robust perennial because it reflects the unresolved tension between individual liberty and governmental power. Without convincing evidence, promises that Draconian gun laws will improve public safety merely offer false hope while encouraging government to grow ever more intrusive. Organizations like the Fraser Institute, the NRA, and other civil rights groups are a needed corrective for the arrogance of the modern bureaucratic state.

Adachi, Ken. The Enemy that Never Was. McClelland and Stewart. Toronto, 1991 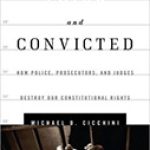