Showing Remorse: Law and the Social Control of Emotion

When Lt. William Calley was first accused of the premeditated murder of twenty-two infants, children, women, and old men in what became known as the My Lai massacre, Richard Weisman recounts, he “couldn’t understand it.” “[T]he mission that day,” he thought, “it couldn’t be wrong or I’d have remorse about it” (14). Calley’s frank explanation of his own bewilderment starkly exposes the deep moral and communal fault line that runs beneath every expression of—or failure to express—remorse. It is a line that Weisman adeptly explores in his engaging book, Showing Remorse.

The last two decades have seen a significant upswing in scholarly interest in remorse and related topics, particularly among legal academics. For good reason. Remorse is an undeniably important force in law and in criminal justice in particular. It can literally mean the difference between life and death at sentencing, and it influences everything from whether juveniles are tried as adults, to the availability of parole, to prosecutorial decisions about charging, plea bargaining, and cooperation, to name just a few.

But in keeping with the offender-focused thrust of these examples, most scholarly treatments examine remorse for what it says about the offender and how he interacts with the legal system. They take expressions of remorse as a given and ask things like, Why do remorseful offenders deserve less punishment? Do remorseful offenders recidivate less? How does remorse impact defense strategy? Legal scholars rarely zoom the lens out all the way to investigate the social practices that are inextricably intertwined with attributions of and reactions to remorse.

Weisman refreshingly does just that. His project, as he puts it, is one of dereification: instead of treating “remorseful” or “remorseless” as fixed categories, he seeks to show how “the imputation of remorse is marked by negotiation, contestation, surrender and opposition, claims and counterclaims, and power and resistance” (8). Readers seeking rigorous empirical work or sustained jurisprudential analysis of remorse won’t find either one here. Weisman’s perspective is one of interpretive sociology; his approach is avowedly constructionist. He draws broadly on a rich array of examples and materials—from high-profile court cases, to the history of psychology and psychiatry, to transcripts, video footage, and first person accounts from South Africa’s Truth and Reconciliation Hearings—to advance his central claim that expressions of remorse are regulative events mediated by social symbols, interpretations, and narratives. His work is in the tradition of Foucault, Goffman, and others who question the fixity of social categories.

Weisman’s interrogation of remorse as an essential trait and his recasting of it as a fluid mechanism of social and moral ordering divides roughly into two parts. He first tackles the process of attribution, or how we—and, in particular for Weisman, judges, parole boards, prosecutors, and other criminal justice officials—go about discerning remorse or its absence in offenders. “True” remorse, he observes, requires unconditional acknowledgement of the wrong, a visible display of suffering, and evidence of personal transformation. Weisman explores those criteria through a close reading of Canadian judicial materials, bringing a welcome granularity to the topic. His emphasis that the suffering remorse demands turns not on verbal claims but on affect and paralinguistic cues, for instance, is one that is often glossed over in the legal literature despite its potentially significant implications. We know that gender, race, age, and class differences can profoundly affect our interpretations of such cues. Remorse is not immune from such biases, and Weisman’s discussion reminds us that we need to think hard about what that means for institutionalizing evaluations of remorse within legal regimes.

But exploring what remorse requires is not Weisman’s main concern. Instead, his focus is what we require of remorse. In legal systems like ours that treat remorseless offenders more severely than remorseful ones, fakery and insincerity are endemic problems. In this context, Weisman contends, even the truest expressions of remorse always can be challenged. What is viewed as sincere and authentic by one audience can be—and, Weisman shows (again drawing on judicial materials), often is—recharacterized as strategic by the next. This means that findings of remorse are inherently ambiguous and provisional; remorse becomes the vehicle onto which we project, and through which we justify, particular outcomes or world-views. The upshot is that attributions of remorse “are not just reactive. They are constitutive” (43). When criminal justice officials attribute remorse or decline to do so, they are less discovering something essential about an offender’s character than they are asserting control over the narrative of wrongdoing and establishing the ground rules by which the moral community is governed.

That point sets the stage for a critique of the use of remorse at sentencing. Like the literature generally, standard remorse-at-sentencing critiques are offender-focused. They deal with sincerity, incentives, what remorse says about how much the offender should be punished, and the like. Weisman comes at it from the other side, exposing remorse as the locus of competing efforts to map an offender’s identity. Focusing on arguments to sentencing jurors in capital cases, he shows how the battle over remorse is hotly contested ground on which virtually every aspect of the offender—his reaction after the crime, his contrition or distress, his reticence or failure to testify—is subject to dueling narratives that seek to paint him as deserving or undeserving of death.

His most powerful observation, though, comes not from trial materials—after all, all well-tried trials are rife with opposing characterizations and narratives on virtually every issue of any import—but from his account of how we have come to pathologize remorselessness in contemporary medical-psychological discourse. Beginning with the infamous 1825 case of Henriette Cornier—an otherwise-pleasant woman who one day, displaying no affect whatsoever, gruesomely murdered a shopkeeper’s daughter for no apparent reason, tossing the child’s severed head out a window to call attention to herself—he sketches how the absence of remorse moved from evidence of an affliction to evidence of a congenital, inalterable abnormality such as psychopathy. And modern treatments of psychopaths, he goes on to show, configure them as the “consummate social performer[s]” (68) with extraordinary abilities to manipulate their audience and to appear to be moved by emotions they do not experience. It is against that backdrop, he argues, that the contingent nature of remorse comes fully into view and that the narratives and counternarratives of capital trials take on their meaning, leaving the offender in a cursed if you do, cursed if you don’t dilemma. Remorse, on this account, becomes overwhelmingly a tool for mobilizing moral indignation.

Larger political points follow. If the attribution of remorse (or its absence) is a tool for mobilizing social and moral forces, can the principled refusal to express remorse likewise be a tool for challenging the moral or social order that the system seeks to affirm through the attribution process itself? We all know it can—as Weisman observes, defiance in place of expected demonstrations of remorse is a “defining feature of some of the most well-known and politically significant trials in Western history” (75)—and the second part of Weisman’s book focuses on these broader political dimensions. Principled defiance “demonstrates the inseparability of legal norms and moral performance” (90); refusals to perform can pointedly question the moral authority of the state to punish.

The link between performance and norms can place both the state and the offender in tough positions. Weisman recounts the case of Robert Latimer, convicted of murder for the “mercy killing” of his severely disabled daughter. Latimer’s steadfast refusal to express remorse became the focal point of a public debate that invoked two antithetical narratives of his act: one of the compassionate father willing to accept incarceration out of empathy and love for his daughter, the other of a callous and premeditated killer who had snuffed out the life of a helpless child. In light of that very public divide, while formally criminalizing Latimer’s act was still easy, mobilizing sufficient moral indignation for punishment was not. Weisman shows how the courts struggled to find the right discourse to justify punishing someone who had not been clearly discredited as a member of the moral community, and how the parole board ultimately sidestepped the issue by narrowly focusing on dangerousness, paroling Latimer on the ground that, despite his remorselessness, he was not likely to reoffend.

Latimer’s remorselessness was a direct challenge to the existing moral order. But what of defendants who subscribe to the moral order but did not commit the crimes for which they were convicted? Weisman succinctly describes their dilemma: they are “attributed all of the most damning characteristics of the remorseless offender” (92), particularly because the process of attribution does not distinguish between denying guilt for a crime and feeling indifferently toward a crime. Because there is no clear model for a normal reaction to a wrongful conviction, it becomes easy to recast the affective state of the actually innocent as pathology or defiance, especially in the absence of a robust and public counternarrative like the one that benefitted Latimer. Paradoxically, Weisman explains, that might leave them worse off than if they were actually guilty, as it spurs correctional officers and parole boards to intensify their efforts to elicit remorse and to continue to deny mercy when it is not forthcoming.

Of course, when a wrongdoer does express remorse consistent with communal expectations, the consequences can be profound. Weisman’s last case-study moves beyond the criminal justice system to look at the intersection of remorse with moments of social transformation. South Africa’s Truth and Reconciliation Commission (TRC) is his foil. He draws on accounts from the TRC to show how the transition to post-apartheid society involved a reshaping of expectations for when expressing remorse was appropriate, and a shift of power to the victims of apartheid to validate such expressions and determine their sufficiency. In this way, remorse became the chief public site of contestation in a process of self-transformation and community (re)definition. Crediting it, Weisman argues, meant supporting transgressors’ claims to forgiveness, just as one could not argue against forgiveness without also attempting to discredit remorse. He also rightly points out that the remorse/forgiveness axis can turn back the other way as well: being too quick to credit and forgive a transgressor can call into question the forgiver’s own moral standing, marking him as someone whose morality diverges from that of the group. Tantalizing questions lurk beneath all of this—Why do (or should) victims have special status in norm-creation by way of standing to forgive (the answer could have noteworthy implications for victims-rights arguments)? Is genuine remorse really sufficient for forgiveness or mercy, as Weisman seems to assume (or is it necessary, but not sufficient)?—although Weisman does not dwell on them.

Where does this put us? Weisman’s critique might leave one wondering whether remorse has any place in the institutionalized legal system at all. My own view is that it does—that is to say, that the system should be cognizant of and foster the relational values that remorse and similar emotions serve (although whether it should do so through sentencing discounts is a different and tougher question). In any case, expectations surrounding remorse are likely an ineradicable feature of our criminal justice system. Seeing them for what they are—an endeavor to which Weisman contributes immensely—is an essential step toward building a system that addresses and channels those expectations in the most just way possible.

Richard A. Bierschbach is Professor of Law at the Benjamin N. Cardozo School of Law of Yeshiva University 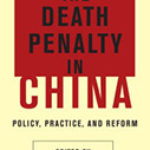 The Death Penalty in China: Policy, Practice, and ReformBooks, Reviews in Brief