The Ex-Prisoner’s Dilemma: How Women Negotiate Competing Narratives of Reentry and Desistance

The Ex-Prisoner’s Dilemma: How Women Negotiate Competing Narratives of Reentry and Desistance

Andrea Leverentz’s The Ex-Prisoner’s Dilemma: How Women Negotiate Competing Narratives of Reentry and Desistance explores the topic of women reentering society after leaving jail or prison. Leverentz examines the competing narratives and conflicting advice women are given from a variety of sources, including friends, family, prison staff, and social workers and reentry counselors working in half-way houses and drug treatment centers. Leverentz’s purpose is threefold: to track changes in women’s lives, establish rapport with the participants, and inductively identify topics relevant to them while reentering society (189), such as how women characterize their lives during the first and second year out of prison, how they spend their time, how they relate to and interact with people in their lives, how they negotiate personal and intimate relationships, and how they desist from offending and drug relapse (56). Leverentz accomplishes each of her goals, and in doing so offers a rich, theoretically grounded set of gendered narratives exploring how female participants constructed an identity consistent with their circumstances such as “ex” drug user/prisoner/offender (15).

Utilizing ethnographic tools, and over the course of a year, Leverentz interviewed 33 (67%) of the 49 participants four times, and the remaining 16 participants between one and three times, capturing the interactions of participants in their social environment. Leverentz’s main argument is that desistance is a process, “one that often includes stops and starts, setbacks, and forward progress” (10) by portraying how reentry is an on-going activity that is “shaped by an interplay between individual choices and social factors” (11). Drawing upon her in-depth interview data and participant observations, Leverentz weaves together the women’s narratives to capture how they make sense of their lives as women and “normal people” (12). The 49 female participants have two things in common: they lived or had lived at Mercy Home, a halfway house for female inmates returning to society, and they had been arrested, and jailed or incarcerated: “Their shared experiences, in prison, at the Mercy Home, and with drug addiction, were central to the bonds the women shared with another” (134).

The Mercy Home is a small 16-bed half-way house that served about 300 women in its first decade of existence (20). It is an important place that “gives women the time, energy and structure to think about their lives … and make pro-social goals for the future” (27). This setting provides the context for how the women negotiate reentry, and influences how women speak about and experience reentry and desistance (19). Although more men are incarcerated in the United States than women, women face increasingly complex issues upon returning home due to their multiple roles as mother, daughter, caretaker of the family, and in their larger role in the community as “othermothers,” a common function for black women in their respective neighborhoods (9). Additionally, women are often custodial parents; being a mother while entangled in the criminal justice system affects a wide circle of individuals, including children, who often end up being cared for by extended family (100). Stints in prison disconnect or completely sever the relationship between a mother and her children, and these complicated relationships make reentry challenging. In some cases, participants wanted to repair fragmented relationships and get their children back, but found their efforts subverted by family members ostensibly acting in the interest of their children.

As all of the participants were recruited due to their connection to the Mercy Home, Leverentz relies heavily on the language of self-help that is regularly used there to assess and analyze the women’s narrations of their efforts to desist from crime and stay drug free. The language of self-help is commonly found in treatment programs like Alcoholics Anonymous or Narcotics Anonymous, but is also used inside prisons and by reentry organizations that offer services and programs to former inmates. The female participants incorporated the self-help language of the Mercy Home into their own narratives when describing their experiences and future plans (12).

While Leverentz discusses the larger discourse of women’s reentry and desistance experiences, her data is only drawn from former and current Mercy Home residents and focuses on explaining how they desist from drug use. Although most of the participants had problems with addiction, not all of the women did; therefore the sub-set of non-drug using participants did not incorporate a self-help narrative. Leverentz did not compare and contrast how these two sets of women differed in their experiences reentering society, if they had the same challenges reengaging in their old neighborhoods, and if desistance from crime was a similar process. Leverentz’s analysis would have been strengthened if she had focused on former female drug users trying to get and stay drug free. This is the case because drug use and addiction complicate the reentry process in ways that non-drug users do not have to contend with while reentering, which is hard enough. For many of the female participants, their lives were further complicated due to the fact that they used drugs, were trying to get clean, or were former drug users who had to avoid the old neighborhood, and the people, places and things related to their past offending.

The focus on drug use and staying clean means that Leverentz focuses on desistance and recovery, as if relapsing into drug use and reoffending were one and the same. (108). But, of course, a person could reoffend without relapsing into drug use (say, if she stayed off drugs but robbed a bank or committed some other non-drug related offense) and (at least in jurisdictions in which marijuana use has been decriminalized) could relapse into drug use without necessarily reoffending. These two separate but related issues intersect, and as a result an underlying but subtle supposition is incorporated into the analysis: If the women simply followed the twelve-step program at the Mercy Home, they would succeed at reentry (113). This is simply false, and undermines Leverentz’s argument that reentry is a messy process that has more than one path.

In order to reenter, women are in need of services, and the Mercy Home offers critical support for women by offering a temporary structured environment when they first come home. By offering educational and employment opportunities, transitional housing, drug treatment, life skills that are required to reenter, and other tangible reentry support mechanisms, this makes these women “privileged” due to their connection to the Mercy Home (173). But when women leave the Mercy Home, and structure and support are withdrawn, the transition becomes more difficult. Unstructured time was a new challenge for many of the participants; Leverentz explores this transition process from the Mercy Home to being fully independent, describing the women’s experiences as they lost an encouraging and supportive environment as “wavering” (62), “withdrawn” and “stressed out” (63). Some of the participants moved into single-room-occupancy (SRO) residences, utilized other programs, or struggled when their post-Mercy Home job did not pan out or their new housing situation became precarious.

Although Leverentz details how the transition home was not “seamless” for a lot of the women who left Mercy Home (67), she glosses over how hard it is to overcome significant barriers to reenter, and there is no indication how the women will overcome the roadblocks they face or the consequences the women must deal with related to their own insecurities and sense of self. Leverentz does not look at the context in terms of how social interactions are shaped by the lack of access to programs and the limited opportunities convicted felons have upon trying to re-establish their life after being released from prison. This could be a function of the fact that 14 participants (29%) were incarcerated for 12 months or less, which strongly suggests that some of the women may have had only misdemeanor charges. This distinction, between felons and misdemeanants, is important. The transition from Mercy Home to independence is complicated based on one’s charge; felons are restricted from public benefits, including public housing, which may explain why many of the participants were more “stressed out” than others while reentering. This is an important factor in reentry; if participants’ families lived in public housing, and the participant was a convicted felon, then they would not be able to live with family. Including the type of charge (e.g. misdemeanor or felony) would have strengthened the use of the women’s narratives, particularly in Chapter 6, when Leverentz examines the conventional markers of success and indicates there is a difference; “their criminal records often still trumped [educational] credentials” (154). A felony conviction or misdemeanor would explain some of the different challenges participants had in securing legal work and why education would not trump their conviction.

The social context of policies that prevent felons from obtaining legal employment or the lack of services provided for women returning home means that some participants had to rely on family, romantic partners and former neighbors, despite the fact that these helpers were also drug users or co-offenders. The truth was that women moved back in with their families, despite their contentious histories, because of the women’s caregiving role, and their need to provide support to family members and care for children (106). Moreover, family provided food and a permanent safe place to live. This reality of reentering undermines Leverentz’s argument that the self-help narrative that encouraged avoiding former people, place and things would support reentry efforts. The women, when avoiding the people, places and things that would otherwise provide social capital and sustenance, complicated their own attempts to reconstruct their life because they choose to live in different parts of Chicago that were unfamiliar and did not offer social support.

Moreover, Leverentz does not use the word felon in exploring how women’s limited choices and competing needs may be undermined due to their charge, and this distinction matters for reentry in a number of ways not considered in the text. Services and programs that are available differ immensely for those charged with a felony or a misdemeanor. Leverentz does not include these differences, even though the 49 participants’ time incarcerated varied widely from no time to 168 months (14 years), with an average of 40.5 months (3 years, 4.5 months), and the number of prison sentences varied from zero to ten, with an average of 2.54. This data suggests that some women were never jailed or incarcerated, others served long prison sentences, and some were churning in and out of the criminal justice system, and failing to reenter, but we don’t know the details of each sub-group or if they have different reentry experiences and outcomes. (For more on “churners, see Jeremy Travis, “Invisible Punishment: An Instrument of Social Exclusion,” in Marc Mauer and Meda Chesney-Lind (eds.), Invisible Punishment: The Collateral Consequences of Mass Imprisonment (W.W. Norton, 2002), 15-36. The reality for the women connected to the Mercy Home is that they were offered invaluable services, and were largely dependent on the availability of these programs to address their particular challenges (58). Unfortunately, such programs are not available for everyone.

Despite these shortcomings, the strengths of The Ex-Prisoner’s Dilemma are twofold: Leverentz makes clear that reentry is a process, and that women reentering society have challenges that are different, and in some respects greater, than those faced by men. By demonstrating how the complexities of women’s lives undermine and challenge individual reentry efforts, Leverentz makes clear that female ex-prisoners can go forward or backward, depending on their own self-sufficiency and resilience. They must learn to navigate twelve-step programs (105); make a sustained effort to stay away from drugs in the midst of re-establishing relationships with those they left behind while in prison; and in re-establishing their own identities (113). All of which is critical for their sobriety and successful reentry. 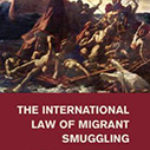 The International Law of Migrant SmugglingBooks, Reviews in Brief