The Neapolitan Camorra is a vast world of criminal clans, traditionally based in the Italian region of Campania and its capital Naples. While Naples is still the pulsing heart of the Camorra, its clans have been successful in expanding their reach well beyond the Neapolitan (and the Italian) borders.

Felia Allum’s book skilfully provides a systematic and meticulous account of Camorra’s familiar organisations and activities abroad, showing how clans evolved from being unsophisticated and independent groups of offenders to the powerful criminal force that the Camorra is today.

More in detail, the study looks at Germany, the Netherlands, France, Spain and the UK between 1980 and 2015, and effectively demonstrates the importance of the interdependencies between the territories reached by the clans, and how the features of “functionality,” “liquidity” and “invisibility” (page 6) remain pivotal to explain the success of Camorra abroad. There are major changes in the behaviour of camorristi when they are outside their Neapolitan base: while their violence is sadly visible in their homeland, camorristi become largely invisible and difficult to recognise when abroad. This camouflage, explains the author, is what makes them really dangerous and allows them to slip under the radar of law enforcement.

The book is organised into six chapters, plus an introduction and a conclusion.

The introduction is mainly useful to understand the methodological choices and challenges dealt with by the author. Allum relies on a mixed method approach, probably the only possible choice she had to gather sufficient data on a criminal phenomenon which suffers from serious information gaps between different countries as regards police and judiciary materials. The abundance of the sources used – ranging from interviews with law enforcement and police data to interviews with former camorristi and court files – is impressive, considering the difficulties in investigating this type of mafia-type organised crime network, particularly abroad, and the fact that the author was able to manage this type of research with a full-time lecturer post. It is worth noting how complicated it can be to carry out meaningful research on organised crime when the time to collect primary data and reflect is little, due to the increasing teaching and administrative commitments in higher education. The sources used provided patchy and incomplete information, but Allum did a great job in putting evidence together, so to offer the reader an accurate and comprehensive account of camorristi abroad.

The first chapter furthers the existing body of research on criminal mobility by outlining a three-phase decision making structure to explain camorristi‘s choice to move abroad: 1) local push factors such as judicial and police activities and fear of gang warfare; 2) global pull factors and specifically the presence of familiar networks that might support them in the territory of arrival; and 3) other global pull factors such economic opportunities and a perceived weak law enforcement regime.

The second chapter is dedicated to the functional mobility of camorristi – how they move around. Here, the author clearly demonstrates how clans are constantly able to interlink local districts and new territories in a two-way exchange, with people, money and other resources travelling in both directions. In line with the existing literature on the mobility of Italian mafias, Allum’s findings show that, when abroad, camorristi want to control and dominate markets, not territories. Their roots remain strong in Naples, and they do not try to diversify their criminal activities but rather tend to carry on the same activities they are already familiar with, even if adapting their criminal strategies to their advantage. This explains Allum’s choice to focus in the rest of her book on four main activities carried out by camorristi on the move: acquisitive crime (ranging from aggravated assault and car theft to robbery and frauds), production and selling of counterfeit goods, drug and firearms trafficking, and money laundering. The analysis of the divergent public perception – of both the general public and law enforcement – of comparable criminal phenomena in different countries (for instance, as regards the role of Camorra in the counterfeiting market in Italy, UK and France, pages 51ff) is particularly interesting.

The following four chapters present analyses of four different clans in five countries, by looking at their involvement in the four main criminal markets specified above. Chapter 3 focuses on Camorra clans in Germany and the Netherlands (Hof, Hamburg and Amsterdam), chapter 4 on France (La Seyne-sur-Mer, Paris and Villeneuve-Loubet), chapter 5 on Spain (Granada, Tarragona and Tenerife, probably the “second homes” for many camorristi because of their pivotal role in European drug markets), and chapter 6 on the UK (Preston, London and Aberdeen). To borrow Allum’s words, the latter is “perhaps the [country] least prepared for Italian mafias” (page 180), where there is clear indication of the clans’ presence as detailed in the numerous examples presented in the chapter, but still limited knowledge of their reach. Overall, these chapters provide a detailed description and analysis of the ubiquitous presence of the Camorra, with opportunity-driven clans operating whenever and wherever they can.

Finally, the conclusions nicely give emphasis and interesting interpretations to the main findings of the book. For instance, Allum claims that the Camorra “does not migrate,” but rather “it travels continuously from one operational base to another” (page 212). The Camorra is still mainly Italian focused, and territory remains the vital element of a camorrista. However, clans have been ready to exploit opportunities abroad if and when the right circumstances arise, and in doing this are damaging international economies. As explained by the author, the ability to expand and invest abroad does not depend only on financial possibilities, but also on being able to count on “willing, loyal, cooperative and knowledgeable enablers who are familiar with the local context” (page 221).

Allum is very honest in clarifying that it is difficult to draw general conclusions, as “no two Camorra clans in Campania are the same” (page 213). She questions the possibility of offering one single explanation or model to explain criminal mobility. The transplantation model, for instance, does not work in the cases analysed. Nonetheless, she offers an interesting typology of the mobility of Camorra clans – commuters, seasonal commuters, regular visitors, occasional visitors, resident abroad.  Last but not least, the book sheds new light on the problems of lack of proper understanding of Italian mafias abroad – which end up being under or over-estimated depending on the countries and the specific circumstances. As Allum concludes, “if the rest of Europe continues to ignore these signs and voices, believing that it is purely an Italian problem, they might be in for a big surprise. I hope it is not too late” (page 230).

Overall, the book is undoubtedly an important contribution to the organised crime literature. It proficiently and with very accessible writing guides the reader on a travel through space and time to understand the globalism of Camorra. The author assumes that the reader has a bit of previous knowledge on Camorra clans and their features and activities in their territory of origin. Readers not familiar with the topic might find it useful to peek into the conclusive chapter before starting with the rest of the book, as some key elements of Camorra clans in their homeland are explained there.

Allum explicitly locates her book in the realm of political sociology. However, it should be of great interest for scholars in history, Italian studies, policing, and mafia studies. It should be a useful read for journalists and senior policy makers as well. 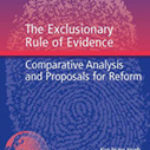 The Exclusionary Rule of Evidence: Comparative Analysis and Proposals for ReformBooks, Reviews in Brief