I first saw law professor Justin Marceau speak at a 2019 symposium on the links between human and animal oppression and exploitation, and was struck by both how timely his talk was, as well as how unusual it was to hear, especially as it followed a talk which discussed domestic violence and animal abuse, and which argued for more prosecutions of animal abusers.

The reason why Dr, Marceau’s talk, and his new book Beyond Cages: Animal Law and Criminal Punishment, was so noteworthy was because it asked us to reevaluate our focus on prosecution and incarceration for animal offenders.

For many of us who have long worked as animal advocates, the proposition that we should reconsider our focus on the criminal justice system to punish animal abusers could be hard to swallow. After all, advocates have been working for years to make legislators and criminal justice professionals take violence to animals seriously and have seen some promising results on that front. Today, all fifty US states plus the District of Columbia have laws making certain types of animal cruelty felony offenses, and since 2019, the PACT Act makes a number of “extreme” forms of violence to animals a federal crime. In addition, the FBI has started tracking animal cruelty as a separate criminal offense, and a handful of states have passed new laws that mandate the creation of criminal registries for animal abusers. All of these developments seem like victories for animals. So what’s the problem?

His argument is multi-faceted. One of the problems with a focus on criminalizing, and punishing, certain types of abuse to animals is that it allows for the continuation of many more, institutionalized forms of violence, such as the production and slaughter of animals for food. The recently passed PACT Act, for example, hailed by the HSUS as “defining moment for establishing federal protections for animals” only prohibits specific types of torture such as the crushing or impaling of animals, and specifically excludes “customary and normal veterinary, agricultural husbandry, or other animal management practice; the slaughter of animals for food; hunting, trapping, fishing; medical or scientific research; [actions] necessary to protect the life or property of a person; or performed as part of euthanizing an animal” (H.R.724). While legislation like this certainly protects some animals in some contexts, it allows for the exclusions—which account for 99.99% of all violence towards animals—to remain both legal and socially acceptable and helps them to become even more entrenched.

But perhaps more critically, focusing on incarceration as a strategy for ending the suffering of (some) animals (in some contexts) may be counter productive to the larger aims of many in the animal protection movement today: an end to the exploitation of all beings, nonhuman and human alike.

As more animal advocates are embracing intersectionality, a term borrowed from Black feminist scholar Kimberlé Crenshaw that refers to the ways that systems of oppression work together and reinforce each other (Crenshaw 1989), we are beginning to recognize not only the interlocking systems of oppression that capture animals as well as people, such as racism, sexism, homophobia, ableism, and speciesism (see for example Adams & Gruen 2014; Cordeiro-Rodrigues & Mitchell 2017; Cudworth 2015; Deckha 2013; Harper 2009; Kemmerer 2011; and Kim 2015) but also the ways that (Western) animal advocates often focus on practices engaged in by non-whites and non-Westerners, and seen as especially cruel. What we see is more attention, and more legislation, paid to activities like whale hunting, animal sacrifice, dog eating, live animal markets, or animal fighting, to the exclusion of practices engaged in, and enshrined in law and social practice, by white Americans (see Elder et al 1998; Kim 2015; Poon 2014).

Not only do these laws only protect a small number of animals, but they criminalize and pathologize the practices of many non-whites, leading to more racism, more incarceration (with all of its accompanying social consequences), and the misguided perception that animals are now safer from harm.

Marceau points out, through his analysis of both case law and real prosecutions, that these laws do nothing to deter crimes against animals, but do create more hostility to minority groups whose practices are targeted, as well as provide legal cover, via the exclusions, for the industries engaging in the most prevalent forms of violence towards animals. Marceau also draws on the literature that demonstrates that incarceration does not end crime, nor does it rehabilitate prisoners. Instead, it helps to perpetuate more crime (as well as poverty, alienation, and countless other factors which impact crime). It also contributes to the perpetuation of racial inequality in the criminal justice system as well as in society in general, as racial and ethnic minorities continue to be policed, arrested, prosecuted and incarcerated at far greater numbers than whites.

Beyond Cages: Animal Law and Criminal Punishment takes on all of these topics and more. It will be, I imagine, an uncomfortable read for many animal advocates who see criminalization and punishment as essential tools in fighting animal cruelty. But it should be welcome to those in the movement who are keen to join together with other social justice movements in a way that seeks justice for all species. 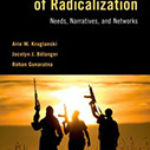 Visas And Walls: Border Security In The Age Of TerrorismBooks, Full Reviews