The Central Park Five: A Chronicle of A City Wilding

In June of 2002, I read an article in the New York Times stating that the New York City Police Department and Manhattan District Attorney’s Office were re-opening their investigation of the 1989 Central Park Jogger case. The reinvestigation was prompted by a claim by Matias Reyes, a convicted murderer and rapist, that he, alone, had raped the Central Park Jogger. The story, written by William K. Rashbaum, was on page B2 of the Times, indicating the hesitance with which the Times was playing the story.

The fact that a notorious rapist and murderer would confess to the crime after thirteen years intrigued me, but it was the other information in the Times article that excited me: the source was James Kindler, someone inside the Manhattan District Attorney’s Office, who was quoted as saying that famed Manhattan DA Robert Morgenthau had authorized the re-investigation. Although Kindler did not release Reyes’s name or details of the investigation, another unnamed inside source did. "Preliminary" DNA test results showed that Reyes’s DNA was "consistent" with some of the evidence left at the crime scene but was not a conclusive match. Even Jesse Berman, one of the original lawyers for one of the Central Park Five defendants soft-pedaled the news, echoing what would later be a common refrain of the NYPD: "One possibility is that they’re guilty and he is too."
At the time I read this article, I was in full research mode, hunting for proven false confessions for an article I would later write and publish with Richard A. Leo. I had accumulated over one hundred proven false confessions and was knee-deep into analyzing them. Some were proven false when the true perpetrator came forward to admit to the crime. Others were proven false by DNA evidence. But few cases involved both types of evidence. The Central Park Jogger revelation was a detour, but one I could not pass up. My article with Richard Leo (“The Problem of False Confessions in the Post-DNA Age”) would have to wait.

That summer, I dug deep into the Central Park Jogger case, and reviewed much of the same information that first-time author Sarah Burns was also reading in preparation for her riveting new book The Central Park Five: A Chronicle of A City Wilding. I read two books — Timothy Sullivan’s Unequal Verdicts: The Central Park Jogger Trials and Harlan Levy’s And the Blood Cried Out: A Prosecutor’s Spellbinding Account of DNA’s Power to Free or Convict — and countless newspaper articles from the time of the crime through the time of the trial. I also did some investigation into Matias Reyes, a serial rapist who had terrorized women on the Upper East Side in and around the Park between September 1988 and his arrest in August 1989. By the end of the summer — even before the DNA results were announced in early September, I had reached a stunning conclusion: the Central Park Jogger defendants were innocent. The Central Park Jogger case, and my analysis of why the boys were innocent, became the case which framed my article with Dr. Leo. Later that year, upon the recommendation of the DA’s office, the convictions were vacated.

Sarah Burns’s book is the first to reflect back on the Central Park Jogger case in the eight years since the five teenage defendants were exonerated.  Both Sullivan’s and Levy’s books (Levy devoted a chapter to the CP Jogger case), were premised on the idea that the defendants were guilty. Indeed, Sullivan’s book questioned the jury’s decision not to convict Korey Wise of the most serious crimes of rape and attempted murder. Burns’s book now stands as the definitive text on a case the consequences of which still reverberate.

Several things make Burns’s book special. Burns, who first got interested in the case when she spent a summer interning at the law office of civil rights attorney Jonathan Moore, had complete access to the trial transcripts. Her detailed account of their trials shows how the lawyers who represented the boys failed them. She is an equal opportunity critic — taking the defense attorneys as well as the police and prosecutors to task for their courtroom performances and for failing to make the connection between the Jogger assault and Matias Reyes’s crimes.

Although the defense lawyers (with the possible exception of Colin Moore and Mickey Joseph) were ineffective, even Clarence Darrow would have had a hard time winning an acquittal. The reasons for this, detailed thoroughly in Burns’s book, have to do with the power of confession evidence and the climate in which the crime occurred. Burns takes the readers back to the pre-Rudy Giuliani New York City of the 1980’s and 1990’s when crack cocaine was wreaking havoc on the streets, few people were willing to brave Central Park at night, and New York was averaging one murder every four hours. She also delves deeply into the racial divide in the city and fits the Jogger case into a uniquely American myth — that of the bestial black male with a special fondness for white women. Although Reverend Al Sharpton was railing against the injustice of the prosecution, his reputation had been tarnished by the Tawana Brawley affair and few took him seriously. Life in the City is much better now than in the late 1980’s but the racism which tainted the Jogger case from the beginning still lurks beneath the surface, occasionally rearing its ugly head from time to time. Because of this, Burns is right to suggest that all may not be well in Gotham City and that a miscarriage of justice like the Central Park Jogger case is still possible today.
In one other way Burns’s book succeeds like no other. She spent hours interviewing the jogger defendants and their families and helps to debunk many of the myths surrounding the boys. Most of the boys were not serious troublemakers with lengthy rap sheets; most did not come from broken families. Although they were not saints, they were not the feral beasts and animals portrayed by even the papers with the best journalistic standards at the time. With one or two exceptions, the Fourth Estate dropped the ball, feeding the public’s frenzy for vengeance and convicting the boys long before they were tried. Burns follows the boys from the time of their arrests to the time of their release and to the present day. We learn of their despair, their loneliness, their hopelessness and we learn of their resiliency, their hopes, their dreams. She has done what few have dared to do to date — she found a way to humanize them.

The book is not perfect. The detailed history of the myth of the bestial black male reads like a college or grad student’s term paper or doctoral thesis (and indeed Burns wrote about this subject at Yale) and distracts somewhat from the compelling narrative of the climate, the interrogations and arrest of the boys, their trials, and their exonerations. And through no fault of Burns, the voices of those in law enforcement and the press who played such critical roles in this miscarriage of justice are missing. The book would have been stronger if Robert Morgenthau, Linda Fairstein, Nancy Ryan, trial prosecutor Elizabeth Lederer, Harlan Levy, and several of the lead detectives had cooperated with Burns. But the lingering presence of the Jogger defendants’ civil lawsuits kept them quiet.

In the wake of the exonerations, I was invited to come to New York to testify at a quickly-convened city council hearing to discuss the need to electronically record police interrogations. The subject was too raw and the hearings were bogged down in in-fighting between those who sided with the defendants and those who backed the police. Although the boys were exonerated and most reasonable people recognize that they were innocent of the attack on the Jogger, many of the detectives and prosecutors involved in the case still cling to the belief that they are guilty. It became apparent to me that the Jogger case defendants, as long as the city and the police officers (and some prosecutors) continued to persist in publicly questioning their innocence, would never be poster boys for reforming the criminal justice system in New York. It is eight years since I testified in New York City and while the New York AG’s office recently published a protocol for electronic recording, it is discretionary, not obligatory, and recording of interrogations is still the exception not the rule, not only in the city but throughout the state.

The Central Park Jogger case remains a dark stain on the criminal justice system in New York City. Until six men and women were exonerated by DNA evidence in Beatrice, Nebraska, in 2008, the Jogger case stood as the single greatest miscarriage of justice in terms of the numbers of wrongful convictions in a single case. To date, none of the boys has received any compensation for the between eight and thirteen years of their lives that were stolen and the civil lawsuit against the police officers is still languishing in the courts. Here’s hoping that Burns’s book (and a documentary with her father, Ken Burns, to follow) force the good people of the City to finally confront the Central Park Jogger case in all of its complexities and to start the process of healing the racial divide that still lingers over two decades after the crime.

Steven A. Drizin is Clinical Professor of Law at Northwestern University and Director of the Center on Wrongful Convictions. 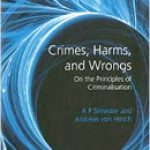 Crimes, Harms, and Wrongs: On the Principles of CriminalisationBooks, Full Reviews 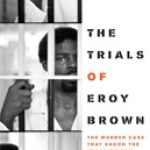 The Trials of Eroy Brown: The Murder Case That Shook the Texas Prison SystemBooks, Reviews in Brief