Young Prince Hamlet posited, “The play’s the thing wherein I’ll catch the conscience of the king.”  For members of the African American community in the early part of the 20th century, the play was the thing that allowed them to retain their collective consciousness of being both American citizens and people with dignity. They desperately needed this tool to deal with the horrors thrust upon their families, because another kind of twisted theatrical production was being performed all too often—the public degradation and lynching of black men. Between 1890 and 1930, these spectacles of shame were not hidden in the woods or executed only at night, but rather, the time and location of the “upcoming” lynching were often listed in newspapers.

During this time period, author Koritha Mitchell states, “…racial violence was often understood as a way of removing evil from society.” The many photographs that survive this criminal chapter of American history consistently reveal a black, mutilated corpse surround by a mob of “righteous whites,” with no grieving loved ones in sight. Mitchell says, “…despite the brutality they recorded, these photographs became souvenirs…” Further, “the ’camerawork’ that came to define mainstream lynching photography most often presented African Americans as monsters that had been subdued by the calmly triumphant whites who surrounded the body.” With violent debasement of a race of people being portrayed as art—in the forms of photography and “live theater”—an answer for African Americans seem to lie also within drama; a drama, however, of their own creation.

Lynching drama, therefore, “emerged in the context of not only dehumanizing imagery,” but also in the context of efforts made by activists, such as W.E.B. DuBois and Ida B. Wells to help bolster the race’s positive self-conception. In 1915, DuBois created an NAACP drama committee—hoping that these scripts would provide racial affirmation.

It is important to note here that Mitchell denies these plays were “protest art,” but rather were illustrations of black achievement, which was precisely what whites were trying to erase by destroying the black family. She makes this case using the concept of “Performance Studies,” which suggests that the use of these plays constituted an “embodied practice”—a bodily act that conveys meaning. The central meaning of these plays then becomes the embodiment of a race as human beings–human beings leading ordinary lives and shown in domestic interiors, where they affectionately sustain each other—the antithesis of the “beasts” presented in the photographs.

The emotional appeal of the first such full-length play, Rachel, written by Angelina Weld Grimké, “largely hinges on the similarities between whites and blacks.” Both the author and the NAACP hope to reach an integrated audience, which led to some criticism from black communities. Grimké countered that she specifically wanted white women to sympathize with black mothers. Regardless of these small critiques, Grimké’s work inspired conversations that led “…to an increasing investment in black-authored drama by some of the most influential ‘New Negro’ leaders of the day.” Rachel also inspired Howard University’s theater department—which encouraged and trained black playwrights throughout the 1920s.

While this topic is fascinating and the author writes with clear intelligence, it also reads like a dissertation. The introduction and chapter one are so repetitive, it seems the intended audience was a committee who might not read every word. For those not familiar with the dissertation process and subsequent need to repeat concepts, it seems as though the author does not trust the reader to understand the underlying social necessity and implications that these plays provided for the black community and individual black families. After Mitchell “makes her case” however, the remaining chapters provide historical insight and a fascinating view into a topic few Americans ever explore.

Although not a typical book for a criminology course, Living with Lynching would be an excellent source for a “culture and crime” or “race and crime” class—even if using just a few chapters of the book. Students of history would find it fascinating–as would students, teachers, and practitioners of using theater to express sorrow and heal from debilitating experiences. Finally, this book is recommended for anyone who is interested in learning how the victims of one of America’s most reprehensible chapters used drama to alleviate trauma.

Beth Adubato is a Visiting Library Fellow at the Rutgers School of Criminal Justice and is a reporter at News 12 New Jersey. 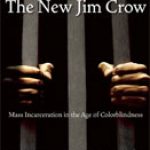 The New Jim Crow: Mass Incarceration in the Age of ColorblindnessBooks, Full Reviews 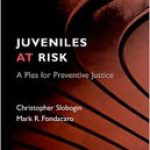 Juveniles at Risk: A Plea for Preventive JusticeBooks, Full Reviews