MISCARRIAGES OF JUSTICE is a comprehensive discussion of systemic problems in the criminal justice system of the United Kingdom that lead to violations of the rights of persons accused of crimes. Although the term “miscarriages of justice” is not limited to wrongful convictions, it is the latter that are the primary focus of the book. The basic premise of the book is that wrongful convictions are the product “of an adversarial system that prioritizes speedy justice over rigorous examination of facts in an effort to get to the truth” (p. 33).

Similarly, Poyser discusses several cases in the 1970’s that raised concerns about the way police obtained evidence used to convict the defendants in those cases. As a result, the Royal Commission on Criminal Procedure was convened to investigate the nature and causes of the police misconduct in the cases. The Commission’s conclusions led to passage of the Police and Criminal Evidence Act of 1984 (PACE), as well as Codes of Practice for the police the following year. However, the process that lead to establishment of the Commission and passage of the legal provisions designed to control police behavior is not well-delineated here.

Chapter Three discusses the causes of wrongful convictions in the UK. In many of these cases, the police fixated on a suspect early in the investigative process and viewed evidence in a biased way toward proving the guilt of that suspect. The police often manipulated statements from a suspect, including the use of coercion and contamination of suspects’ statements by providing the suspect with information needed to give credence to their admission of guilt. This tunnel vision also resulted in disregarding evidence that would have implicated other suspects. Defense attorneys are faulted for not being diligent enough in looking for evidence that would have established the innocence of their clients. Prosecutors are criticized for not fulfilling their legal and ethical duty to share evidence with the defense in their possession that might be helpful to the defense case.

Chapter Four further explores the tunnel vision issue identified in Chapter Three. Poyser and Milne conclude their discussion with a couple of interesting proposals. The first proposal is that “as part of their training, investigators should be encouraged to analyze specific miscarriages of justice in order to confront the learning opportunities they present and to acknowledge that they are a very real problem” (p. 58). The second proposal is that police interviews of suspects and other witnesses should be focused on obtaining information, not confessions. This proposal would avoid the problem that questioning designed to produce a pre-determined outcome is not only of questionable ethics, but it can alter the memories of witnesses and lead to miscarriages of justice. Unfortunately, the authors do not address the issue of how to convince the police that they have created a culture in which these problems exist. Unless that hurdle is cleared, the police will not be motivated to adopt the proposals espoused in this chapter.

Chapter Five discusses the victims of miscarriages of justice. The persons who have been wrongly convicted are the most obvious victims. The public is well aware of the time spent in prison by these victims. However, the wrongly-convicted are also victimized in other ways. Often the system releases them from prison but still refuses to declare them innocent of their crimes. While in prison, these persons are often not be placed in programs that would prepare them for re-adjustment to the outside world upon release because they are often released long before their anticipated release date. Wrongly-convicted persons frequently do not socially mature while incarcerated at the same rate that they would have on the outside. As a result, they tend to view themselves as being much younger when they are released than they really are. Their adjustment to the outside world is often hampered by feelings of anger and bitterness and by a lack of financial resources. Because relationships with family members could not be developed during the time that the wrongly-convicted persons were incarcerated, those relationships after release are often troublesome – especially so with any children involved.

Poyser makes the often-overlooked observation that society as a whole may be a victim of miscarriages of justice. Media reports about these cases may undermine public confidence in the proper operation of the criminal justice system and make some members of the public less willing to report crime to the police or otherwise cooperate in their investigations.

Chapters Six and Seven focus on remedies – formal and informal. The primary formal remedy in the UK now is the Criminal Cases Review Commission (CCRC), created in 1995 to provide a more systemic review of possible miscarriages of justice. There is no discussion, however, of how such cases were handled by the criminal justice system prior to creation of the CCRC, or why that earlier process was inadequate.

The Criminal Appeal Act of 1995 gives the Court of Appeal jurisdiction over convictions that are “unsafe.” Angus Nurse argues that the definition of “unsafe” remains unclear. The work of Graham Zellick is cited to establish that there are 5 categories of unsafe convictions: 1) situations where evidence that might have been critical to a jury’s verdict was not presented to the jury at trial; 2) cases where the defendant would probably have been acquitted, but for some procedural irregularity or mistake in the application of the law; 3) cases where some irregularity in the process resulted in a trial that fell short of basic standards of fairness; 4) cases that leave observers with serious doubts about the accuracy of the verdict; and 5) cases where changes in case law have occurred that, if present at the time of the defendant’s trial, would likely have brought about a different result.

The discussion about the CCRC is important because the Commission was supposed to be a primary solution to the problem of wrongful convictions. While the CCRC can refer cases to the Court of Appeal when it concludes that “there is a ‘real possibility’ of a conviction being quashed” (p. 98), it has no power to overturn convictions. The CCRC has been criticized in the UK for not being effective enough in identifying miscarriages of justice. Critics complain that the CCRC has been provided inadequate resources, resulting in investigations that take too long and too infrequently result in referral of cases to the Court of Appeal.

Nurse also argues that the mandate of the CCRC is too limited. He believes that its role should be expanded to include a responsibility for making recommendations for the improvement of the criminal justice system in order to avoid miscarriages of justice.

Informal remedies include campaigns conducted by organizations with an interest in a particular case or an interest in rectifying wrongful convictions in general, investigations of individual cases by journalists, individual citizens who investigate cases (and often post the results on their efforts online), and innocence projects. Poyser cites his own co-authored work with Savage, et al., in support of an assertion that the “’driving force’ in the fight against injustice” (p. 121) is the families of the victims of miscarriages of justice. They often conduct campaigns that either result directly in overturning an unjust outcome or that bring enough attention to a case to motivate some organization to become involved in the campaign.

This is a surprisingly short book, running only 134 pages. Sometimes the brevity is a bit problematic. Some things would have benefited from more extensive discussion (some of which have been mentioned earlier in this review). Most notably, however, the Criminal Cases Review Commission should have received more attention. The role of the CCRC in the effort to reduce wrongful convictions is of critical importance. Other countries are also dealing with the problem of wrongful convictions and are looking for ways to mitigate this problem. How promising is such a commission in dealing with the problem of wrongful convictions? The process of creating the Commission should have been discussed in more detail. Similarly, evaluations of the effectiveness of the Commission would have benefited from more detailed discussion.

Early in the book, the authors indicate that miscarriages of justice present critical lessons for policing. While there are occasional references to the nature of these lessons, the book would have benefited from a much more thorough discussion of that topic. References are made to studies that have proposed methods of improving police behavior, but those references are frequently lacking in sufficient detail. As mentioned earlier, a critical omission is a failure to include a detailed discussion of ways that the police can be convinced that their investigations are too frequently problematic and can be motivated to take corrective action.

Nevertheless, the book is well worth reading. The bibliography is especially strong and will be of great benefit to readers who want to explore further the important topic of wrongful convictions and their causes. 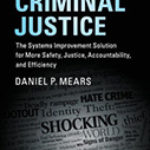 Youth Who Trade Sex In The U.S.: Intersectionality, Agency, And VulnerabilityBooks, Reviews in Brief