On 6th May 1882, during the troubled period in Irish history known as the Land War, two of the most important men in the British administration of Ireland – Thomas Burke, the under-secretary for Ireland, and Lord Frederick Cavendish, the newly-appointed and recently-arrived chief secretary for Ireland – were brutally stabbed to death with surgical knives in Dublin’s Phoenix Park, just a few hundred yards from the vice-regal lodge, the residence of the Irish lord lieutenant, Earl Spencer. The assassins were members of a hitherto unknown republican secret society, the Irish National Invincibles. The murders of Cavendish and Burke shocked public opinion in Ireland, Britain and further afield, and led to a determined police effort to identify and catch the killers. This was eventually successful, with 25 of the Dublin-based conspirators and their helpers being arrested, mainly due to the efforts of Inspector John Mallon of the Dublin Metropolitan Police’s “G” or detective division. Mallon also persuaded several of the arrested Invincibles to turn Queen’s evidence against their colleagues, with the result that five of the principals in the murders were sentenced to death and hanged in Kilmainham Prison in May and June 1883. The Invincibles’ story did not end with the executions, however. There was a further sensational development in July, when James Carey, the reviled Invincible informer who saved his skin by providing damning evidence against his fellow conspirators, was murdered on board ship while traveling to a new life in South Africa. Carey, who was traveling under a false identity, was recognised by an Irish passenger, Patrick O’Donnell, who shot him, a deed for which O’Donnell went to the gallows in December 1883.

The Phoenix Park murders and their aftermath have already been explored by a number of historians, but Kavanagh’s account is the most accomplished to date. Kavanagh makes skilful use of contemporary newspapers, diaries, letters and police reports, as well as published memoirs of key political figures from the period, to create a vivid portrayal of this key episode in Irish history. Her focus shifts frequently in a carefully plotted and fast-moving narrative that is always accessible to the reader: one moment one is eavesdropping on the conversations of Invincibles in public houses and hotels in Dublin and Paris, the next one is present when Queen Victoria is pressing officials for minute details of the Phoenix Park murders or of the Invincibles’ trials. Kavanagh’s presentation of the evidence is masterful, with numerous well-chosen quotations from her primary sources helping to re-create the murky world in which the Invincibles operated and documenting how their bloody deed in the Phoenix Park impacted on Irish and British politics and political figures in both the short and long term.

Kavanagh’s handling of the period preceding the 1880s is, in contrast, less assured. The attempt to condense seven centuries of Irish history from the 1170s to the 1870s into the seven pages of the preliminary chapter titled ‘A Brief History’ (xi-xvii) was bound to fall short of the high standard of scholarship that is evident in the rest of the text, and few Irish historians (if any) will be convinced by its portrayal of hostile landlord-tenant relations and “feudalism” in the post-Famine decades — but these are relative quibbles. This is an excellent account on the whole and, what is all-too-rare in Irish historical writing, a well-written and thoroughly enjoyable read. It is highly recommended. 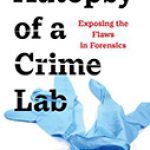 Autopsy of a Crime Lab: Exposing the Flaws in ForensicsBooks, Reviews in Brief