In the study of democratization in post-communist countries, attention to policing is minimal. Yet the transition from communist to democratic policing, one would think, should be a critical component of the overall process. Without it the full legitimation of a new order is unimaginable. Perhaps because it has happened so seamlessly in quite a few formerly communist regimes, predominantly in East Central Europe, the problem so seldom arises in either a theoretical or practical sense, but the consequences of ignorance are serious. Even formerly Soviet Georgia has reformed its police service.

Not so in Russia. As the authors of the book under review make clear, the modern Russian police—inheritor of a two-hundred-year-old authoritarian tradition—face a considerable challenge in adapting to the democratic model. Two decades of democratic development during which other trappings of democracy have been acquired have yet to yield the expected transformation.

In order to explain this evident failure of reform, as well as to fill a conspicuous gap in the literature, Semukhina, who teaches criminology and law at Marquette University, and Reynolds, a law enforcement officer before joining the faculty at the University of Central Florida, have teamed up to produce a comprehensive portrait of the modern Russian police. Based on ten years’ research supplemented by field work in the Volgograd region, it is extensively documented from Russian as well as Western sources.

According to Semukhina and Reynolds, the story of the modern Russian police necessarily begins in 1802, when a Ministry of Internal Affairs (in Russian abbreviation, MVD) was established by Alexander I. Its subsequent evolution through the turbulent nineteenth century up to 1917 is rendered in elaborate detail from secondary sources in chapter one. Chapter two covers its Soviet successor, the NKVD, in similar fashion up to the death of Stalin in 1953. The third chapter takes the story from there to 1985, the eve of the perestroika era, drawing parallels en route between Nikita Khrushchev’s reform efforts and those of the tsars. The policies of Gorbachev, Yeltsin, and Putin are taken up next. In all of these four chapters the authors emphasize continuity, but fail to explain its cause except for the historical similarity. Throughout this whole time period the Russian police has been a centralized and militarized structure serving more to protect the rulers from the people rather than the other way around, and chronically immune to reform efforts that would reverse its protective role, making it civil and accountable. But why?

Unfortunately, despite occasional nods to experts such as David H. Bayley and Louise Shelley, the book lacks a conceptual framework to make all of this history truly meaningful. The historical record, according to the authors, is the explanation—the Russian police developed into a centralized, politicized, and militarized structure and no further search for reasons is warranted. Perhaps so. But from a social scientist’s point of view, or even as a study in public policy, this is not entirely satisfactory. Why did reform efforts fail? What did “reform” mean in the nineteenth and twentieth centuries in Russia and the Soviet Union? What does “reform” mean today? Was bureaucratic inertia responsible? How did the benevolent police state of continental Europe, by contrast, become reformed? Would path dependency analysis get us closer to the fundamental reasons for the lack of positive change? How are such habits as those of the police state transmitted over the centuries?

These historical chapters comprise Part I — each rounded out by concluding remarks summing up the facts reviewed yet remaining less than adequate as explanations for what transpired or did not in each period. In spite of the densely-packed details, furthermore, some critical aspects receive no treatment or mention. Among these it would have been useful to know: the role of police in the GULAG system as well as in the suppression of “enemies” of various sorts through campaigns of mass murder; the massive release of prisoners from the GULAG by Khrushchev and its effect on the legitimacy of Soviet policing as well as the whole Soviet regime; and the use of compulsory psychiatric treatment of dissidents in the Khrushchev and Brezhnev eras. A passing reference is made early on to Marc Raeff’s idea of Russia as a “well-ordered police state,” but no use of this—or of any other related concept—is made to explain the Russian imperial and Soviet communist models of policing or of their striking similarities in terms of cause and effect.

Part II is concerned with the current, post-Soviet status of the Russian police. There is a chapter on its structure, functions, and manpower, complete with numerous organization charts along with a concluding catalog of the many issues and problems facing the police. Not enough emphasis, however, is given to the fact that the Russian President still appoints its top stratum, which certainly places Russia at the police state end of the spectrum of models of policing, or close to it. While the descriptions of the functions of the various units in the organizational charts are certainly complete and beyond the reader’s needs or comprehension, not enough information is supplied to interpret their meaning. Would not organization theory be of help here? How do these compare with police structures in industrialized democracies? Where is power situated in this bureaucracy? What part have the interior troops played in Chechnya? Why are there interior troops still as part of the MVD? Another chapter deals with public-police relations, including results from copious opinion surveys showing the public’s low levels of trust and satisfaction as well as police officers’ own perceptions. Yet with so much variation in the results of public opinion polling, are they reliable? This is a problem of Russian sociology. Does public opinion even matter?

Nevertheless, that “public-police relations in Russia are strained” (p. 196), in view of the evidence presented here, is putting it mildly. The sources of this negative public reaction are corruption and abuse of power, the theme of chapter 7. There is plenty to discuss, and the authors’ treatment of this aspect is characteristically comprehensive. Unfortunately, they abandon a strict definition at the very outset — no sooner having articulated it, and all police misdemeanors are presented consequently as corruption, including physical abuse and torture, falsification of statistics, abuse of power, and racketeering (“protection”). This creates for the reader confusion instead of elucidation. Not all of these are amenable to the same remedy in the form of anti-corruption measures; corruption and police criminality have to be kept separate. Just as unfortunately, the prognosis for amelioration is weak, because “the leadership’s political will . . . is needed to effectively combat police corruption,” yet “it is unclear whether mutual alienation will continue to grow or steps will be taken toward strengthening the public-police partnership to address the issue of corruption” (pp. 230-1).

In their final chapter the authors examine the most recent attempt to reform the Russian police, undertaken in 2011 by President Medvedev. This so-called reform was actually crafted by the MVD itself, so very little genuine change can be expected from it. Indeed, as the authors fail to point out, this typically top-down presidential reform initiative appears to have been utilized as an opportunity for legislating an extraordinary degree of featherbedding, providing a broad range of benefits for serving officers, their families, and survivors—a veritable welfare state for the police and their dependents. This is not emphasized, although it should have been. Only here do Semukhina and Reynolds bring in the notion of democratic policing; the reader is left to wonder why it had not been applied consistently and explicitly beforehand, when it could have been an aid in assessing the reform of Russia’s police. Without such a theoretical and comparative framework their book remains a pile of facts rather than analysis, and their conclusion, while intuitively appealing, is not actually demonstrated by the results of their research. “Future police reforms depend,” they write, “on two factors: [1] the development of civil society and . . . [2] a multiparty democracy” (p. 251). This is questionable because they do not deal with the dynamics of civil society, multiparty democracy, and policing at all earlier. So the conclusion and the book’s contents are totally divorced from one another.

Likewise, at the outset they claim their study “is based on the . . . notion of the state police nexus. . . . Theories of police studies consistently agree that the nature of police institutions inherently depends on the development of the prevailing government political system” (p. x). If the Medvedev reforms have failed, and Russia is now assumed to be a democracy, then this theory is wrong because according to the evidence presented here clearly the tail (police) is wagging the dog (state); otherwise, the unreformed police are part of an authoritarian political system and Russia is not a democracy. This is a conundrum to which the book is a testament, but it has no apparent answer.

This tome presents a number of technical and scholarly challenges. In line with its encyclopedic ambitions, the book contains 42 pages of references and 811 endnotes, which works out to 101 per chapter. Much of the Russian material is derived from a single web-source, www.consultant.ru, a commercial legal studies aid for university students, instead of being taken directly from official government websites or those of newspapers and magazines. It has a 17-page index, but “organized crime,” mentioned in the text, is not in it. The reader is overwhelmed with undigested facts and unfamiliar terms, many literally translated from Russian terminology which is so eccentric that it does not help understanding. Why use “roofing” for krysha, for example, when Western publications have already adopted it into the English language? Numerous references are made to “Slavic Russians,” which suggests that some Russians are not Slavic, which is absurd. There is a table at the end of each historical chapter summarizing significant events year-by-year, but there is no List of Tables. It is not clear what audience this book is meant for, unless it be the authors’ own students — or whether it is intended as a reference book.

It is daunting to read from cover to cover. Anyone hoping to avoid factual, organization chart, and terminological overload can however, still get the gist of this potentially useful book by simply perusing the Preface (which is also the introduction), the concluding sections of each chapter, and the final chapter on Medvedev’s ill-fated reforms. That might be a good way to start. Others can enjoy the dubious benefits of full immersion in the minutiae of two centuries of Russian policing. Semukhina and Reynolds have done the scholarly world a service by bringing us the full story in (almost) all its details; what remains to be done with all of this information is to uncover its meaning and achieve understanding.

Perhaps the book is for practitioners in law enforcement, or those who may have to come into contact with the Russian police in some official capacity. As such, its prescriptions, while lacking in theoretical grounding, are eminently practical: reduction of its political subservience; decentralization; demilitarization; improved assessment and training; more transparency and accountability; involvement of civil society in reforms; and development of realistic expectations regarding the police (pp. 245-50). The authors’ skepticism about the prospects of change are certainly well-founded from a practical point of view.

When Women Sexually Abuse Men: The Hidden Side of Rape, Stalking, Harassment, and Sexual AssaultBooks, Reviews in Brief 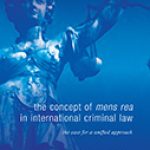 The Concept of Mens Rea in International Criminal Law: The Case for a Unified ApproachBooks, Full Reviews